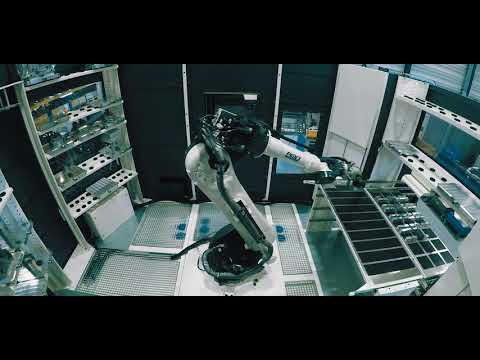 The Edumar Metaalbewerking in Someren, the Netherlands, all that counts is spindle hours.  Manufacturing is planned highly efficiently down to the last detail. Many of the turning and milling machines at this metalworking company are therefore equipped with automated solutions. At the beginning of the year, an ACURA 65 EL from HEDELIUS was put into operation, together with a Titanium 180 from BMO Automation. Working in conjunction with the automation system, the 5-axis machining centre is set to manage up to 8,000 spindle hours over the course of the year.

Brothers Marius and Eduard Wijlaars founded Edumar Metaalbewerking in Someren, the Netherlands, in 1995. They started out in a barn, working after hours and at the weekend. “We worked at our regular jobs all day, but ran our own company in the evenings and on weekends. At a certain point, we switched over to just working for ourselves,” recalls Marius Wijlaars. Some 23 years after the foundation of their company, Edumar has 32 members of staff, half of whom are self-trained. The company has also long since moved out of its farm building and into a state-of-the-art production hall. But they have not quite abandoned their old site. “Since 2017 we have been based in our 1,800 m² hall in Broekstraat in Someren, which houses our mechanical production. We have expanded our old premises several times over recent years, and there is still an assembly plant there today,” explains Managing Director Marius Wijlaars.

The Someren-based metalworking specialist primarily manufactures stainless steel and aluminium components for Dutch and German customers from the packaging and medical technology sectors, the food and chip industries, shipbuilding and toolmaking. The company also produces stock items for contract customers, in order to keep production flexible and at full capacity, as well as ensuring short delivery times for customers. “Thanks to our automated production and our stocking of components, we are able to deliver with very short lead times. What’s more, we can do that despite the fact that we often produce prototypes or small batches of no more than 50 to 100 parts,” reports owner Marius Wijlaars proudly.  The company’s mechanical production site on Broekstraat is impressive. Seven turning machines and nine milling machines are lined up close together, often paired with automation systems. Everything is perfectly organised, structured and pared back for efficiency. Marius Wijlaars explains: “Before we embraced automation, we could only produce one part per night, with our first automation systems we managed seven, and later 16. Today we’ve got much further than that. The machines are all networked together so that drawings and programmes can be accessed on any machine.” Edumar is looking to make further advancements in future. The aim is for the machines to be able to communicate with each other independently and issue a report if any problems arise, if lubricants become scarce or another limitation poses a risk to productivity.

Great faith in the ACURA 65 EL

It is no wonder, then, that the company expects big things from their machines. Every new machine must represent a step up in productivity. Most recently, they purchased an ACURA 65 EL from HEDELIUS Maschinenfabrik in Meppen, Germany. “The last machines that we acquired managed 5,000 or 6,000 spindle hours. With the HEDELIUS, we’re looking to reach up to 8,000 spindle hours per year. Standstills are simply unheard of here,” declares Eduard Wijlaars, outlining the company’s ambitions. That represents a utilisation ratio of over 90%. In doing so, the company is showing great faith in the ACURA 65 EL and the product provided by BMO Automation. The automation manufacturer has already supplied Edumar with a number of systems and is thus no stranger to the company. However, the ACURA 65 EL is Edumar’s first machining centre from the northern German CNC machine supplier HEDELIUS. “We heard from acquaintances that HEDELIUS is good and offers a positive price/performance ratio. We saw an ACURA 65 for the first time at Promas and then visited the HEDELIUS factory. We were won over by the machine there,” explains Eduard Wijlaars. Promas BV - Professional Machine Support is HEDELIUS’ Dutch retail partner and is also responsible for handling the company’s services in the Netherlands.

Ultimately, Edumar opted for the ACURA 65 EL due to a number of factors, including the rotary/tilt table, ease of operation and the accessibility of the machine from the front, despite the automation. “The ACURA’s lateral robot loading allows us to load individual parts into the machine from the front during the day, as the working space remains fully accessible,” says Marius Wijlaars, explaining why this was a plus point. The compact machine also offers particularly impressive precision. Edumar Metaalbewerking manufactures components for material analysis devices, among other things, which must meet the very highest standards of quality. The components must not have a single scratch, and everything must be documented in the measurement log. Other parts for gluing equipment must be within the tolerance range of 1 hundredth to 1.5 hundredths of their whole machined length, while internal fittings must be performed with nano-scale accuracy. The component sizes handled by the ACURA 65 EL range from small parts with dimensions of 50 x 50 x 80 mm all the way up to the maximum limits of the machine’s travel, i.e. 700 x 650 x 600 mm (x/y/z).

Another convincing argument in favour of the ACURA 65 EL was its inbuilt 65-unit tool magazine and the additional stand-by magazine with 180 tools and a taper cleaning station. As such, the tools needed for machining are always present in the magazine, including replacements. If a tool gets worn down or breaks, this ensures that the machinery does not come to a standstill. “The huge tool magazine is seriously impressive,” enthuses Marius Wijlaars. “We don’t have tool setup times.” The taper cleaning station allows the tools to remain in the stand-by magazine, eliminating the need for regular removal, cleaning and reloading, and thus almost completely doing away with the high cost factor. If a tool for a component is ever unavailable, the robot automatically stops processing the workpiece and selects another that does not require the tool in question. This allows production to continue without any interruption.

Since early 2018, the company has been using the ACURA 65 EL from HEDELIUS together with a Titanium 180 from BMO Automation. As all of the employees already have experience in using 5-axis machines and Heidenhain controls, there was no need for additional training. The system could be put into operation immediately. “We have highly experienced, committed and reliable staff who began working on the machine immediately,” says Eduard Wijlaars with satisfaction. Moreover, the ACURA 65 EL and the Ti180 are also interacting very smoothly. The Managing Director says, “We are very happy with the system, as the machinery and the automation are working together well.” The people at Edumar Metaalbewerkung in Someren have no regrets about buying their first HEDELIUS.

Machining centers of the customer. 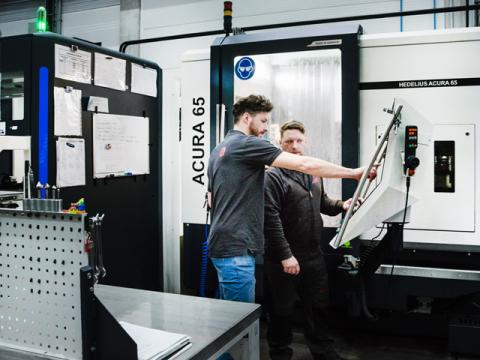 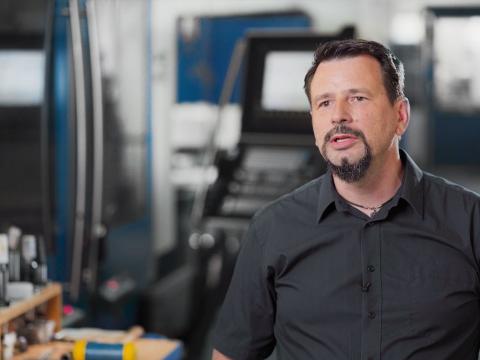 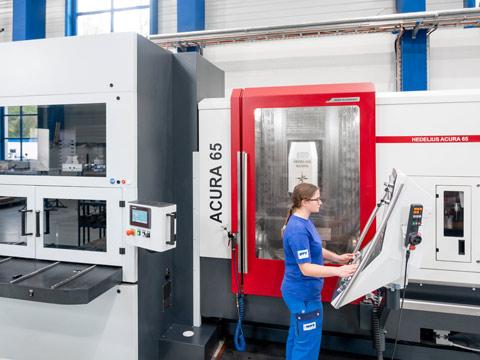 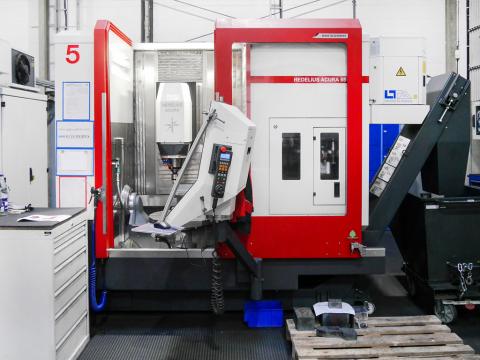 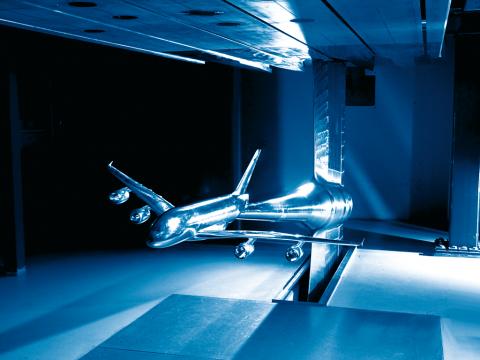 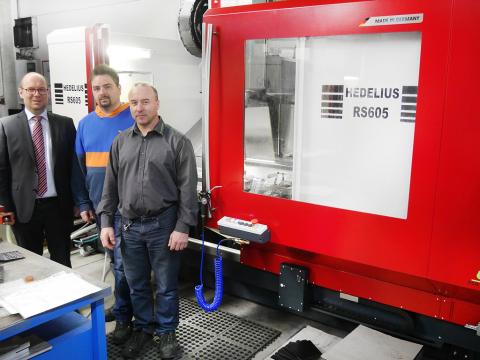 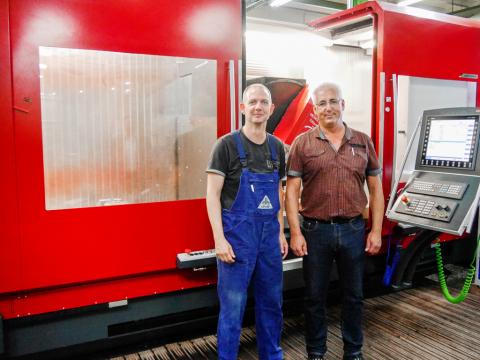 Together with the impressive machine concept, there was another important purchasing criterion that led the Doraus to opt for HEDELIUS – its expert personal support. Find out more 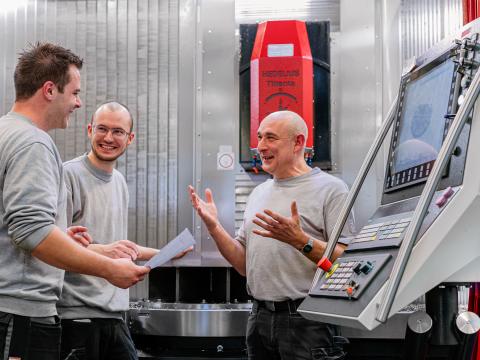 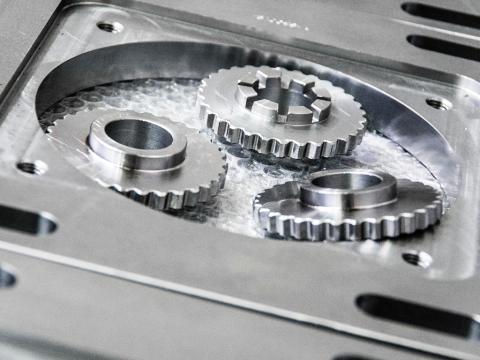 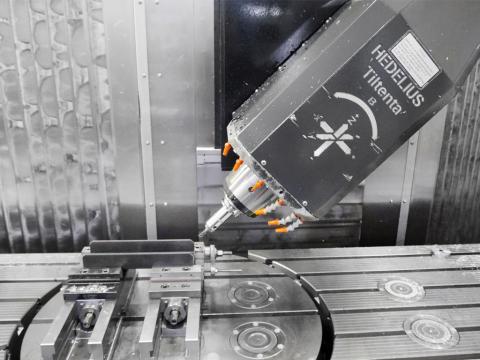 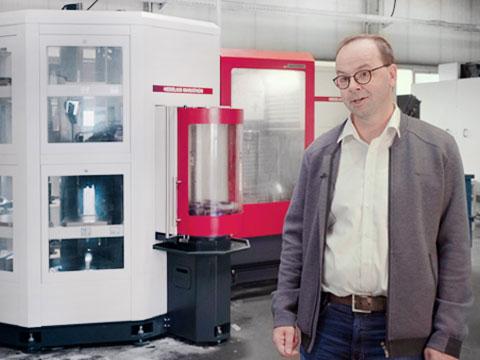 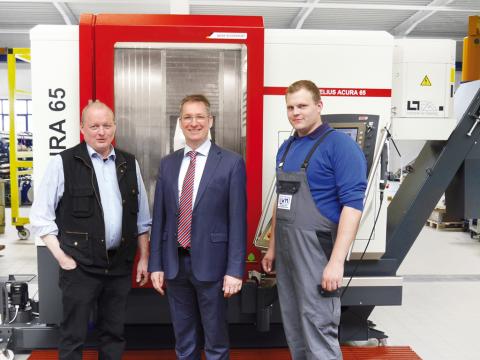 For the precise machining of glass fibre-reinforced plastics for a wide range of applications WKT-Wernemann Kunststofftechnik GmbH uses the 3-axis and 5-axis machining centres from HEDELIUS. Find out more
Privacy Settings